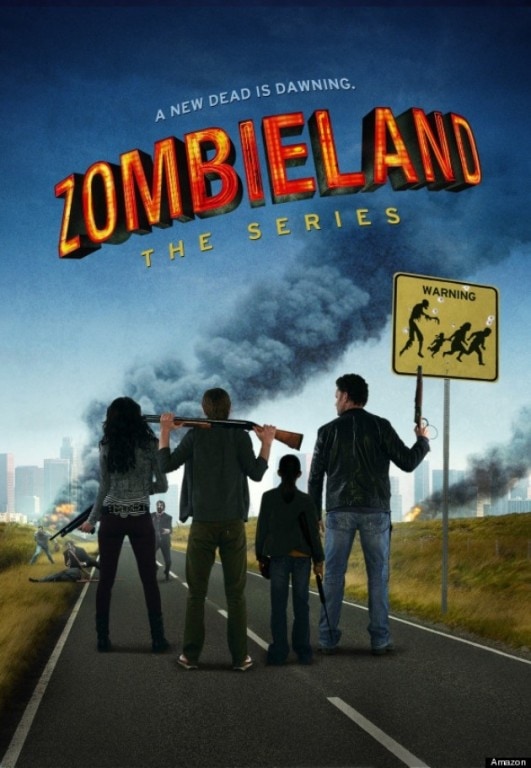 Amazon has released 14 pilots of original television shows (if that’s even the right word for online streaming shows). The public can view all pilot episodes free, then vote for which episodes should get a full season release.

The Zombieland pilot re-hashes a lot of what happened in the Zombieland movie, acting as it’s own entity, rather than a continuation or a spn-off. All of the main film characters are present: Columbus, Tallahassee, Wichita and Little Rock.

In the Amazon version, Tallahassee isn’t quite as cool and appears to be bit of an idiot, although no less of a zombie killing machine. Columbus is a bit more “cool” and slightly less awkward than in the film version of Zombieland. Wichita and Little Rock are very similar to the film versions of the characters.

In addition to the four main characters, a new regular character is introduced – Detroit. She is an ex-OnStar employee who has continued to operate the service, helping survivors find each other and only appearing as a voice through the vehicle’s system. I haven’t decided how I feel about this character yet. On one side, Detroit can help give the show direction, rather than the group simply roaming aimlessly, as in The Walking Dead. On the other side, how the hell has one woman maintained the entire OnStar infrastructure?

The pilot episode of Zombieland was fairly entertaining and contained multiple laugh out loud situations. I’m not ready to call the series a “must watch,” but I would definitely give it a shot by watching a few more episodes before making a decision (if there were more, of course).

Watch the Zombieland pilot, then let me know what you think!