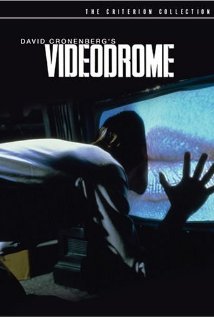 Courtesy of  Alamo Drafthouse and Scene Stealers, I gratefully took in a showing of Videodrome (1983) in 35mm last night. Thanks!

Max Renn (James Woods) operates a new-age TV station in Toronto. On the look-out for new and edgy programming, a station producer intercepts a pirated torture/snuff feed out of Pittsburgh. Max becomes completely obsessed with the pirate TV show, Videodrome.

My description is intentionally oversimplified… If you’ve ever seen a David Cronenberg movie, you know why. I don’t want to ruin too much of the craziness.  If there is a “type” of horror movie I like best, I would say it is whatever classification Cronenberg falls into… Maybe, psychosis is the right word?

Videodrome is a very obvious social statement about the over-consumption and desensitization of the public to sex and violence in TV programming and the desire to “live in public,” even going as far to portray television as being just as important to human survival as food and shelter. Funny enough, Videodrome was released thirty years ago – long before the day of social media.

If you haven’t gathered, I love Videodrome in all its craziness. Pay close attention to the dialogue to get the most from this film.

This review was originally written by Travis for and published on Slasher Nation.

Recommendation: A must-see for fans of the psychological thriller and enough gore to keep the gore-hounds happy.
Rating: 4 out of 5 slashes (the Slasher Nation rating system)