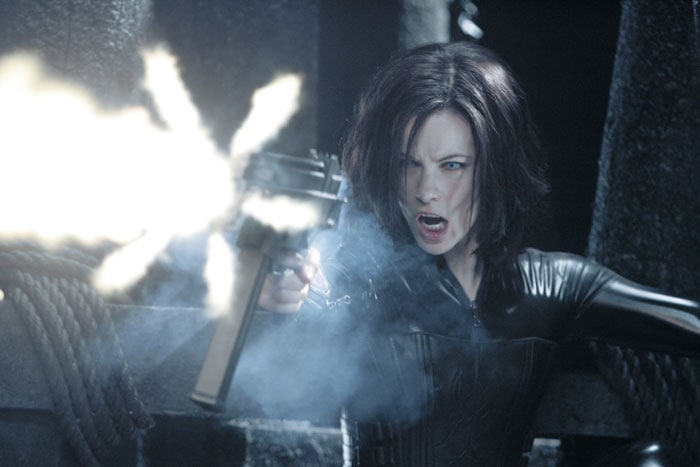 Day 2 of the Underworld saga in the 2012: A Movie a Day, series – Yesterday I watched Underworld (2003) – Underworld: Evolution (directed by Len Wiseman) picks up right where Underworld leaves off with Selene (Kate Beckinsale) on the run with the “Liger”, Michael (Scott Speedman), wait, wrong movie… Michael is actually half Lycan and half Vampire, but more powerful than both, right? Then why does he ALWAYS get his ass kicked?

Selene and Michael are on the run from the Vampire leader (Yes, another incorrect term), Marcus (Tony Curran), for doing things deemed necessary by Marcus himself… “Hey, you’re right… But fuck you anyway!” But, oh yes, Selena has/knows the key to releasing William (Brian Steele), the oldest and strongest Lycan… But wait, I thought Michael is stronger, guess not? And since Selene is now boning a Lycan (half-breed) she will definitely release William and go against her own species, right? Doesn’t really make much sense to me, but whatever. Any movie in the action/horror genre MUST be filled with holes for a movie to even take place. Maybe a little common courtesy and explanation from Marcus could have ended everything from the moment he was brought back to life (Yes, there it is again… Incorrect terminology)… Or is that even the reason?

Maybe I missed something in the story, but if Marcus was the first vampire and William the first Lycan… How the hell is their father, Corvinus (Derek Jacobi) still around? And, wasn’t it Marcus who did not want William hurt during the movie-opening flash back, now he wants to kill him? I probably missed something. Oh, nope, didn’t want to kill him… So, I guess I don’t understand the point of the movie at all… Both Vampires and Lycans have always had a leader. Now the original Vampire and Lycan will lead each side in union (presumably)… But that must not happen? Why?

Also, now Selene can live in the light because the blood of Corvinus…

If I am seriously missing something, let me know!

NOTE: Selene’s pistols finally run out of bullets at an hour and 23 minutes into the film! I knew it was bound to happen eventually! At this time, the pistols are only semi-automatics. Re: yesterday’s post (Underworld)

The point of this movie is 100% lost on me! There really is no reason to watch this film, unless you’re like me and must see all the movies in a series if you plan watch any single movie in the series. Evolution cost more than twice as much to make and brought in just over half of the box office receipts of the original… And that is no shock to me.