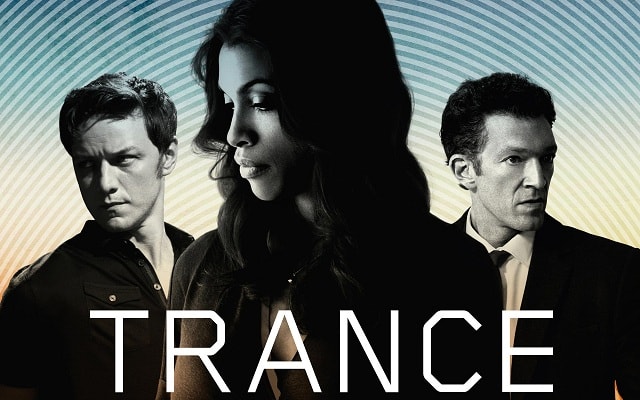 Last night, I took in a screening of Danny Boyle‘s new thriller, Trance, at Glenwood Arts Theater. To be released April 12 in Kansas City.

In Trance, a gambling addicted art auctioneer named Simon (James McAvoy) teams up with a group of local criminals to steal a painting worth over $30 million. During the crime, Simon back-stabs his cohorts and hides the painting after receiving a traumatic head injury. Unable to remember the location of the painting, Simon visits hypnotherapist Elizabeth Lamb (Rosario Dawson) in hopes she can help him remember the location of the painting. Does she have more power over Simon than he knows.

Trance is one of those movies you MUST pay attention to while watching. Period. There are many layers and even a short bathroom break will cause you to get lost in the insanity. Being Trance has many levels, I don’t want to ruin too much by giving details.

Let’s just say, if you’re a fan of Inception (2010) or eXistenZ (1999), psychological thrillers or basic whodunits, Trance is the movie for you.

From the beginning, Trance is full of action and suspense with stunning visuals, typical of a Danny Boyle film. Rosario Dawson steals the show both with her acting and beauty.

If I had to “knock” the film, my only complaints would be that there wasn’t quite enough setup in Simon’s character early on to let the audience completely believe him in the end. As well, it appears Boyle has been watching way too many Michael Bay movies, with all the lens flares…

I read one review by a “professional movie critic” that called Trance – “moving, provocative, entertaining and presents an interesting conundrum,” later saying the film lacks a “steady pace of clarity.” As I stated in the beginning, pay attention… It is obvious this critic failed to complete the basic task of actually paying attention the the film they attempted to review.

Recommendation: Worth the price of admission, if you aren’t riddled with ADD. Definitely worth a Redbox rental, if you would rather wait a few months.