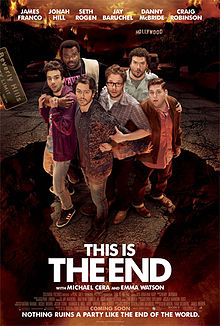 I was lucky enough to attend a screening of This is the End on Thursday night. The film is set to be released on June 12.

While attending a party at James Franco‘s house, Seth Rogen, Jay Baruchel, Jonah Hill, Craig Robinson and Danny McBride try to survive the Apocalypse, as they are not taken to heaven. This is the End is based off the publicly unreleased short, Jay and Seth vs. The Apocalypse (watch the trailer).

It’s really tough to describe/review this movie. This is the End feels like the movie a group of friends would really make… The type of movie many groups of friends have likely sat around and said to each other, “That was some funny shit. We should make a movie.” Well, when your group of friends are wealthy Hollywood A-listers, you can!

If you’re afraid of dirty comedy, stay away… If not, enjoy! At many times, it felt as if This is the End was unscripted, with the actors legitimately making fun of their friends and all their faults. It was fun. Trapped in boredom, the group decides to make a sequel to Pineapple Express (watch the fake trailer)

For me, the “characters” of Michael Cera and Danny McBride were by far the most hilarious. Cera goes the complete opposite direction as you would imagine from the roles he plays, while McBride is… Well, exactly what you would image Danny McBride to be like. A hilarious dick!

Billed as a horror comedy, This is the End is not scary, with most of the demons and demonic possessions being funny, rather than scary.

Recommendation: For comedy fans, This is the End is worth the bucks to watch in the theater. For horror fans, I would recommend waiting for a Redbox or Amazon Instant Video rental.