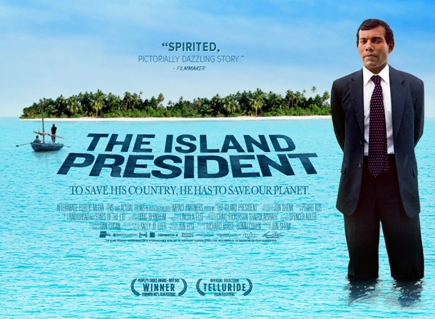 Today, I took in a screening of The Island President, part of the PBS Independent Lens film series and Community Cinema (view the events calendar across the US), shown the second Saturday of every month at Tivoli Cinemas in Westport in Kansas City, MO – View full schedule

The Island President, winner of the People’s Choice Award for Best Documentary at the Toronto International Film Festival from Jon Shenk, tells the story of President Mohamed Nasheed of Maldives, his struggles with bringing true democracy to his country and subsequent battle with climate change, which is slowly causing his 2,000 island nation to disappear into the sea as ocean levels rise and his country erodes away.

For anyone who does not yet believe that climate change/the greenhouse effect exists, put these two documentaries on your watch list: The Island President and Chasing Ice (2012).

From imprisonment for political protest, to creating a democracy, to being elected president, to begging the world for cooperation in finding a solution to a global problem, Mohamed Nasheed’s story is inspiring, terrifying and heart-breaking. Maldives is the world’s lowest lying country and is the beginning example of a larger problem that could easily affect many other countries. Over the last decade, Maldives coastline has eroded 300 yards as the country fights to build sea walls and walls of sandbags around the coastline of cities to slow the ocean from overtaking their islands.

The film’s main focus is the 2009 United Nations Climate Change Conference, in which Mohamed Nasheed pleaded to the world to help find a solution for the issue consuming his country, climate change. At the Conference, Mohamed Nasheed convinced the world to “agree to try” to reduce carbon emissions… A firm commitment was not reached. Maldives pledged to become carbon neutral by 2019. The United States pledged to cut greenhouse gas emissions by 17% (below 2005 levels) by 2020, 42% by 2030 and 83% by 2050.

As with every documentary, there are real-life developments before the film is even released. In the postscript of The Island President, we learn Mohamed Nasheed was forced out of office in a coup d’état and forced to publicly resign at gunpoint by supporters of his predecessor.

This part has little to do with the film itself, but a thought of my own to be interjected – I find it interesting that the United States government picks and chooses which Democracies to defend with a military presence and which ones they do not. A small country that has little to offer the US, economically, is ignored as its democracy is overthrown, however, countries which barter oil or are located on trade routes are defended to nearly no end.

Recommendation: I very much enjoyed this documentary and recommend it to anyone who is interested in climate change and/or enjoys a story that will inspire. The film will be shown on KCPT in Kansas City on April 22 at 10pm and is available on iTunes, Netflix and Amazon Instant Video to stream online.

Share your thoughts below. I love to discuss, especially documentaries!