I eagerly awaited the release of David Fincher’s Americanized film version of Stieg Larsson‘s posthumous best seller, The Girl with the Dragon Tattoo. In anticipation for the movie’s release, I decided to watch the original Swedish film adaption, directed by Niels Arden Oplev from 2009.

I should mention, I have never read the Steig Larsson’s trilogy. I will not give away too much for those who plan to watch either film or read the book. In fact, I will not give too much to story overview at all. These are simply my thoughts while watching Fincher’s version of the film, in comparison to Oplev’s.

I enjoyed the 2009 film greatly, watching the English dubbed version instead of the subtitled version, but dub vs. sub is a conversation for another day.

Leading up to viewing of Fincher’s re-make, I made three predictions of differences between the films:

Fincher’s version of the film garnered a $100 million budget. My initial thought, it didn’t need even close to this large of a budget. The 2009 version had a budget of $13 million, and brought in over $104 million in box office receipts. 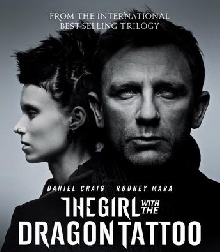 Quite honestly, I’m not sure where the difference in budget went into Fincher’s film.

Cast? Absolutely. Stars known in the US are going to cost more than relatively unknown actors.

Detail? Nope. The 2009 film set a much creepier tone with the detail put into the research done by characeters; Mikael Blomkvist ( Michael Nyqvist, 2009. Daniel Craig, 2011) and Lisbeth Salander (Noomi Rapace, 2009. Rooney Mara, 2011), especially in reference to the evidence collected regarding the murders.

Intro sequencing? Probably part of it! The intro sequence to Fincher’s film, while very interesting and creepy, was completely void of relevance to the film. 100% unnecessary.

Trent Reznor joined Fincher once again (The Social Network) for the score to the film, however, it didn’t seem to improve the tone of the movie. Niels Arden Oplev’s movie score set a much more disturbing feel to the film.

Unnecessary additions? Absolutely! This also brings me to my first prediction. There will be at least one explosion – I said I will not give away too much, and I will not, but the explosion was completely unnecessary and the scene involving the explosion was addressed much better by the 2009 film, giving much more depth to Lisbeth’s character. There are also other changes from the 2009 version, which may or may not be more accurate to the book, since I have not read it, but many of these changes also created holes in the story, leaving any thriller lover asking, “Why the hell would he/she do…”

The “sex” scenes being less graphic really depends on which scene you are referencing. Some were more graphic, some less. Without giving away anything, the main scene I was thinking about when making my prediction was less graphic. This was mainly due to the way Lisbeth was portrayed during the scene. In case you’re wondering, Rooney Mara looks better naked than Noomi Rapace… I knew that question was on your mind.

I will get to the ending in a moment.

Overall, I really liked the Americanized Fincher re-make of the film. The downfall, for me, I watched Oplev’s version immediately prior. A big plus for both films, longer than two and a half hours each, neither movie felt too long. This says a lot about a film.

In Oplev’s film, Lisbeth seems much more emotionally disturbed and more intelligent, and more greatly controls each scene. Fincher’s portrayal is more of an emotionally confused girl who does what she must in a bad situation, rather than one who is seriously asocialAdd a Tooltip Text and deserving of being placed in the care of a legal guardian. I believe this is because Fincher fails to set up the back story as to why Lisbeth has become a ward of the state. Story changes from the 2009 film, such as the manner in which Lisbeth and Mikael come to work together also aided in making me feel like Fincher’s Lisbeth is less intelligent than Oplev’s.

The ending of Fincher’s movie was completely different than the 2009 version. It was not shorter or more condensed, simply different.This has a lot to do with the differences in the results of the court case against Mikael at the beginning of each movie. Fincher’s ending was much more Americanized and lends greatly to my view in differences in the mental/emotional state of Lisbeth in the two movies.

I highly recommend David Fincher’s The Girl with the Dragon Tattoo, however, with that recommendation, I also recommend watching the Niels Arden Oplev version AFTERWARDS.

If I had to pick, I recommend Niels Arden Oplev’s 2009 version over David Fincher’s.