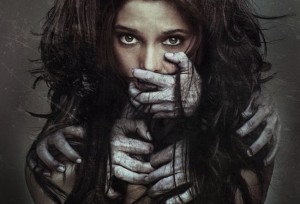 A young couple is haunted by something sinister that was released while performing a parapsychology experiment in college.

Similar to Paranormal Activity, but with more than 1100 times the budget. Seriously.

The Apparition (2012) brings nothing new to the horror genre and completely fails to live up to the haunting imagery of the film’s poster and the intrigue injected by the film’s trailers.

The Apparition nearly turns interesting at one point, then fails to deliver anything more than a few jump scares.

The Apparition was easily the worst film I saw in the theater in 2012. Luckily for me, I saw the film for free at a pre-release screening.

This review was originally written by Travis for and published on Slasher Nation.

Recommendation: Skip The Apparition, unless your significant other forces the issue.
Rating: ½ out of 5 slashes (Slasher Nation rating system)