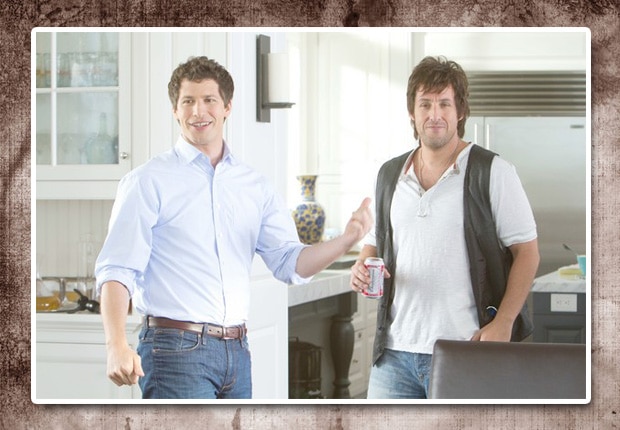 Tonight, I was lucky enough to be invited to a research screening of the new Adam Sandler and Andy Samberg movie set to be released in June. The movie’s title has still to be decided, but the screening pass lists the movie title as That’s My Boy, IMDB lists the title as Donny’s Boy and supposedly the original title was I Hate You, Dad.

To get a few questions out of the way

How did I get research screening tickets so far in advance? Honestly, I am not completely sure. As you may or may not know, I am watching and blogging about a movie a day in 2012. I have contacted many different companies telling them of my 2012 blog and simply asked if they would include me in any promotional email or mailing lists for in-theater or DVD screenings. In addition, many radio and TV stations give out advance screening tickets. That being said, I am not sure if some companies added me to their lists because of the blog or just because they add people who ask. I am sure some of both is true.

Will I tell you which companies and websites? No. Call me a dick if you want, but why would I compromise my opportunity to go see a movie by giving you the chance to go instead, right?!

On to the movie

Donny (Adam Sandler) was the “lucky” 13-year-old in 1984 who hooked up with his hot teacher… The movie picks up in present day, with Donny broke and owing $40k to the IRS and facing pending imprisonment. Once famous and wealthy after his story was made into a movie, Todd (Andy Samberg), the love child of Donny and “Hot Teacher,” has done everything he can to hide from his father.

As a last resort for cash, Donny agrees with a reality TV show reunion with Donny, Todd and “Hot Teacher” (who is still in prison for having sex with a minor). This agreement is made without Todd’s knowledge, but Donny finds that a relationship with his son is more important than staying out of jail.

There are too many hilarious scenes to mention… And I would rather leave the suspense, but let’s just say – Adam Sandler and Vanilla Ice run a train on Todd’s boss’s mother and remember Lunell who played the hooker in Borat: Cultural Learnings of America for Make Benefit Glorious Nation of Kazakhstan (2006)? Well, this time, she is a stripper at a club with a 24-hour omelet bar!

The movie will most likely have a few scenes cut, that’s the point of a research screener, but the deleted scenes will definitely be worth a watch.

That’s My Boy (or whatever they will end up calling it) is well worth an opening weekend theater ticket. The movie is the most funny movie I have seen in a theater since The Hangover (2009).