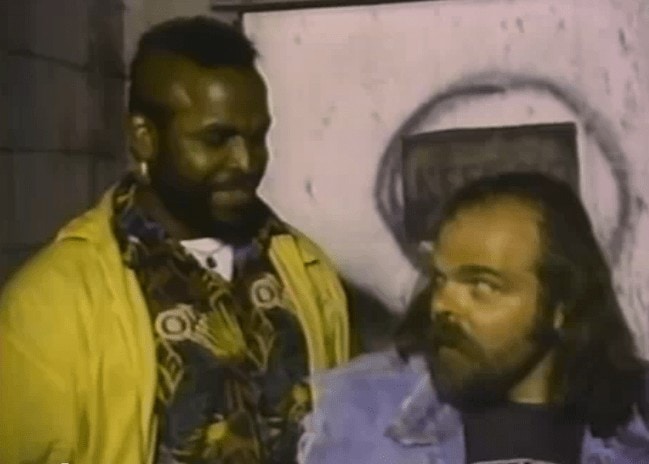 One of the fun things about attempting to watch a movie every single day in 2012 is the opportunity to watch random unknown movies shown on obscure TV stations late at night. If I were to simply follow suggestions from readers and followers I am likely to watch 90+% of movies I have already seen, so flipping through the channels and looking through TVguide.com for movies showing on TV, which I haven’t seen, is a nice way to switch things up.

The problem with this method, as I’m sure you can imagine, is that bad and obscure TV stations are most likely to show bad and obscure movies… This is the case with Straight Line (directed by George Mihalka).

As a 32 year-old male, I grew up as a HUGE fan of “The A-Team.” Who my age wasn’t? So, when I saw a Mr. T movie on BounceTV early this morning, I was curious… I had never heard of it. As I have never heard of the movie, apparently, nobody else has either. IMDB says Straight Line was released in 1990, Rotten Tomatoes says 1992, Fandango says 1988, Yahoo! Movies says 1992 and Wikipedia doesn’t even have it on Mr. T’s page… Hmmm? For this post’s purpose, I will assume IMDB is correct.

There is good reason nobody has heard of this movie. Other than the hilarious choice of wardrobe for Mr. T and the variations on styling the mowhawk, there is nothing else to enjoy about this film. Also comical, the movie score is much more fitting of a horror, a genre where George Mihalka is better known… For his only recognizable film – My Bloody Valentine (1981).

This movie is SO unknown that I couldn’t even find a screenshot or a trailer… I could only find the clip of highlights shown above (by the way, the uploader says the movie is from 1989)…

Straight Line definitely falls into my “Bad” category… If, as a male my age, you haven’t heard of a Mr. T movie, there is good reason! Skip it, unless you are one of the most die-hard Mr. T fans on the planet. Straight Line is rated 5.5/10 on IMDB and not rated on Rotten Tomatoes.