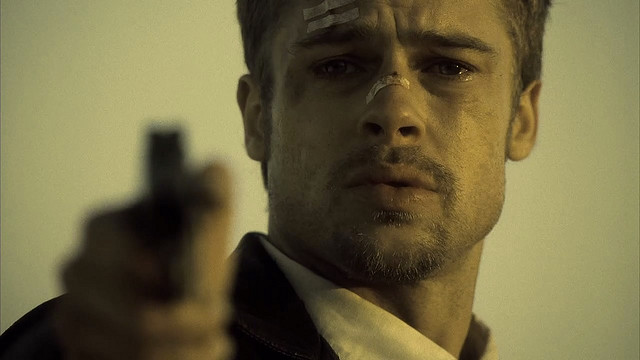 Today, I went with an easy one.

Se7en, directed by David Fincher, is one of my all time favorite movies. If you haven’t seen it, you are A) much younger than me or B) WAY older than me.

From the moment I saw Se7en, it became my favorite movie. I simply love the creepy, disturbing story and the way the movie is filmed; dark and dirty, with lots of rain. This type of cinematography seems to pull me in, more than any other style. The style simply makes me feel the story at its core.

Se7en never disappoints. It seems new and exciting each time I watch it. I go back and forth about which of the Seven Deadly Sins is my favorite. This time, Pride. Damn’, she would rather commit suicide than live with a scared face!

After watching Se7en for about the 50th time in 2000, or so, I developed a minor obsession with the movie. Well, it was more my interest to learn about the topics, philosophy and books discussed in the movie. Due to my desire to learn, I bought nearly every book discussed in the movie, and read many cover to cover, including: In Cold Blood by Truman Capote, which has become one of my favorite books and stories surrounding the writing of the book; John Milton’s “Paradise Lost,” and Milton’s entire works, actually; Dante Alighieri‘s complete work, including “Divine Comedy”; The Complete Works of Donatien Alphonse François, Marquis de Sade; W. Somerset Maugham‘s Of Human Bondage; The Canterbury Tales by Geoffrey Chaucer; various writings by St. Thomas Aquinas, a 19th century two book clinical psychology set on sadism and masochism and multiple books about various serial killers.

My friend Josh Weaver and I used to joke that if my house were ever raided for whatever reason, I would probably be convicted, no matter the crime, simply based on the reading material. I still have most of these books.

Lastly, of course, the quote left behind after the “Greed” murder

One pound of flesh, no more, no less. No cartilage, no bone, but only flesh.

This quote is from Shakespeare’s Merchant of Venice, which I own as well, and named my second dog after the story’s heroine, Portia.

I don’t want to give away too much for the few who haven’t yet seen the film: Se7en currently has a 8.7/10 rating on IMBD and is 85% fresh on Rotten Tomatoes, with 94% of audiences liking the film.

If you’re like me, meaning, you aren’t afraid of taboo and enjoy things which may make others uneasy, Se7en is the PERFECT film for you. If Forrest Gump is your favorite film, followed closely by Finding Nemo, you may want to skip this one.