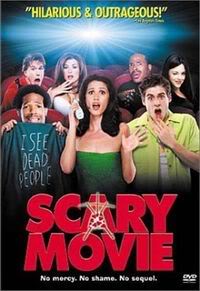 A group of teenagers are stalked by a bumbling killer one year after they drunkenly hit a man with their car, then dispose of the body in this parody of 1990s horror, directed by Keenen Ivory Wayans.

Parodied and/or referenced in Scary Movie: Scream and I Know What You Did Last Summer, Buffy the Vampire Slayer, The Sixth Sense, The Usual Suspects, The Matrix, The Blair Witch Project, Dawson’s Creek, Amistad, The Shining, Psycho, American Pie, Kazaam and the Whassup? ad campaign by Budweiser… I’m sure I missed some.

Scary Movie is a movie that makes fun of itself, with characters often realizing they are in a film, or imagining what it would be like if the if their life were actually part of a movie… A rip on the Scream series.

Relying almost entirely on parodies, it is tough for Scary Movie to stand the test of time. Being a teen in the 90s, this isn’t the case for me, but I imagine many people in the younger generation will find much less entertainment in Scary Movie than I.

I am a big fan of Anna Faris, mainly from the Scary Movie franchise. I’ve always found her innocence adorable.

As I watch the film now, I find it less entertaining than I did when I saw it in the theater in 2000.

Recommendation: If you were a teen or in your early 20s in the 1990s and are familiar with many 90s horror films, you will likely appreciate Scary Movie, if not… It could go either way. Scary Movie is currently available on Netflix, iTunes and Amazon Instant Video.