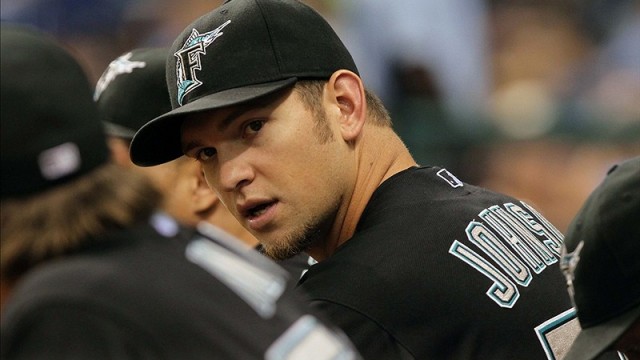 According to Jayson Stark of ESPN, the Kansas City Royals may have interest in acquiring 28 year-old starting pitcher Josh Johnson from the Maimi Marlins. The righty may be the next piece dealt away be the Marlins, who have already traded SP Anibal Sanchez, INF Omar Infante and 3B Hanley Ramirez.

The Marlins Ace will require a very high price from a potential Marlins trade partner:

An official of one club that spoke with the Marlins’ brass told the Daily Rumble on Wednesday that he would estimate the odds Johnson stays in Miami at “95 percent.”

This, that official said, is not Wayne Huizenga’s Marlins. And what’s transpiring now is not a fire sale. It’s a statement, mostly, that the Marlins of Hanley Ramirez and his friends had proven they couldn’t win and wouldn’t win. So they’re looking for a whole new recipe. But they’ll move Johnson only for a monster return.

An executive of another club reports the Marlins say they will trade Johnson only for a package centered around a young, star-caliber player who isn’t arbitration-eligible. So who’s that? Mike Trout? Stephen Strasburg? Chris Sale?

The list of clubs that are likely to make a run at this guy — or already have — includes the Red Sox, Angels, Rangers, White Sox, Blue Jays and Royals. But the message they’re hearing back from the Marlins is that Johnson is the toughest player on their roster to trade, with the possible exception of Giancarlo Stanton.