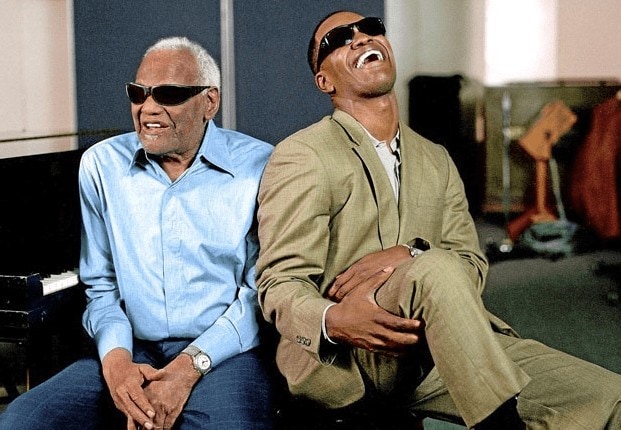 I loved this movie when it came out in 2004 and I loved it as I watched it on ION Television tonight. Ray was easily in my list of favorite movies of 2004, a year with many movies I really enjoyed.

Jamie Foxx is absolutely brilliant in his portrayal of the legendary Ray Charles. Foxx captures Charles’s mannerisms and personality perfectly.

Foxx was so good as Ray Charles that he received the 2004 Academy Award for Best Actor.

Some critics have complained the script did not stand up to the quality of acting in the film, but honestly, how do you expect to perfectly compact 30 years into a two and a half hour movie?

Every aspect of this movie is acted perfectly, from main characters played by Regina King (Margie Hendricks) and the gorgeous Kerry Washington (Della Bea Robinson), to every bit part. No one actor is miscast.

If you’re a fan of Ray Charles’s music, as I am, I highly doubt you will find much, if anything, to dislike about this movie.

Watch this movie. Unless you only like stupid comedies and over-the-top action movies, I have no doubt you will love it.