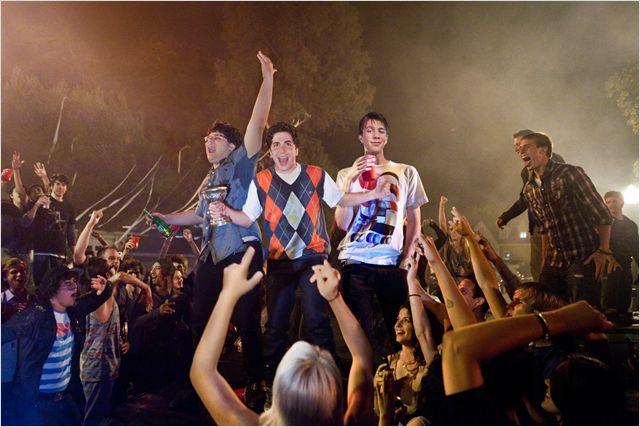 Last night I had the pleasure of attending a pre-release screening of Project X. I brought along Brandon, to keep me company.

Project X (directed by Nima Nourizadeh) was funny and entertaining and a bit crazy. That being said, it is really not much different than any other movie produced by Todd Phillips (The Hangover, The Hangover 2, Old School).

The story revolves around Thomas’s (Thomas Mann)17th birthday, which also happens to be his parents’ anniversary. A bit of a dork, his parents go out of town, trusting Thomas to have a few friends over, but Thomas’s best friends Costa (Oliver Cooper) and JB (Jonathan Daniel Brown) have a different idea… 1500 of their closest friends show up. Nudity, ecstasy and rioting take over the neighborhood.

The film is shot mostly in 1st person, from the standpoint of an AV Club kid, with additional footage from other cameras at the party.

Ever since watching the movie last night, I have been trying to decide whether or not to recommend the movie. It is funny. It is entertaining. There are some good one liners. I just cannot decide if I would recommend going out and dropping $15+ on an opening night movie ticket.