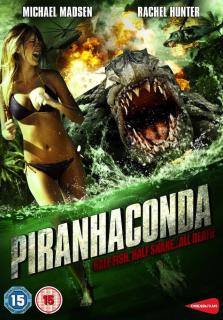 In this made for TV movie, a giant Hawaiian snake is human hungry, while Prof. Lovegrove (Michael Madsen) is in search of the beast, aiming to study the mutation and life of the beast. As well, a low-budget film crew is thrown in to the mix as film producers have just cut off funding for their film.

The worst part of this movie, it is nothing more than just another “giant snake” movie… Almost as bad, the piranha aspect of the Piranhaconda never really gets developed. The beast is essentially a 50 yard-long snake with lots of teeth who eats its victims whole. Piranhas take lots of small bites very quickly and live/travel in schools, so that’s not really possible with a beast this size that’s supposed to be an unknown species, unless it’s trying to eat… I don’t know. I can’t even think of anything. SEE how bad it is!

One bright side… A character said “Piranhaconda” when the kidnappers (damn’ spoiler, sorry) were trying to figure out what the beast may be! I LOVE when that happens! Also, some of the shots of the Hawaiian landscapes (if that’s were it was actually shot) were pretty nice… Yes, I know – I’m stretching it.