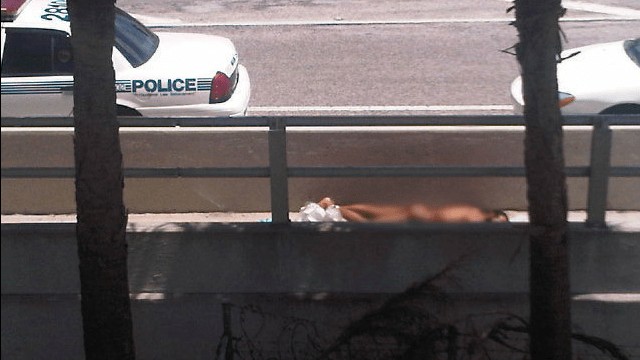 The Zombie Apocalypse has begun!

A woman saw two men fighting and flagged down a police officer, who came upon a naked man mauling the other man.

Humans don’t “maul” and they don’t walk around without clothes!

The officer ordered the naked man to back away, and when he ignored the demand, the officer shot him.

The “Man” didn’t hear or ignored the officer who said he was going to shoot?!?!

The naked man continued his attack after being shot once, and the officer then shot him several more times.

Holy shit! The “Man” kept eating after being shot once!??!

Police said the other man was transported to Jackson Memorial Hospital Ryder Trauma Center, reportedly for treatment of critical injuries.

They better keep this guy quarantined!

Javier Ortiz, a spokesman for the Fraternal Order of Police in Miami, said that based on information he’s received, the officer who fired the shots “is a hero and saved a life.”

The officer may have saved the world! As long as the doctors euthanise the “victim.”

Brothers and sisters, the zomie apoclaypse may, in fact, be upon us, so I ask…

What is the best weapon to fight off a zombie attack?