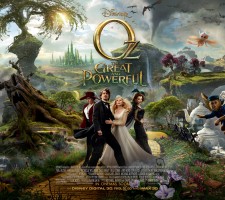 Yesterday afternoon I decided to use a free movie ticket I had from Cinemark to watch Oz the Great and Powerful.

I don’t want to ruin too much of the film, since anyone with kids or who loves the The Wizard of Oz (1939) will likely see Oz the Great and Powerful.

In Oz the Great and Powerful, a prequel to The Wizard of Oz,  a traveling circus magician (James Franco) is scooped up into a tornado while performing in Kansas in 1905 and finally touches down in the land of Oz. When arriving, the magician, Oscar (known as Oz), learns of the prophecy of the land that a “great wizard” will arrive and make everyone in the land of Oz “free” from the “Evil Witch”… But which Witch is the “Evil Witch”?

The story of Oz the Great and Powerful is, in fact, horrible. Many things are unexplained, such as why there is conflict in the land of Oz in the first place. Oscar’s (Oz) companions on this journey are absolutely annoying and bring nothing of value to the film and the story tries to make them over-the-top representations of incidents that occurred in Kansas.

SPOILER, kinda – The “Wicked Witch,” as The Wizard of Oz fans know her, was “created” in a ridiculous manner. Originally she was a “good witch” who somehow thought Oz was in love with her and was going to make her Queen of Oz… Talk about a crazy bitch! She had know Oz for about 30 minutes (real time, not film time) and created this entire story in her head. She was SO heart-broken that she never wanted to feel again, so another witch removed her heart, which turned her green and ugly.

Visually stunning? Not really. At times, yes, but overall, there are  many, many times where the effects are overly cartooney and the 3D is overly “jab at your face.”

Recommendation: If you plan to see Oz the Great and Powerful, see it in 3D. Like I said, at times it is pretty amazing. If you have kids, you will probably see it eventually when it hits Redbox or Netflix, but don’t set aside a special time… It’s not worth it.