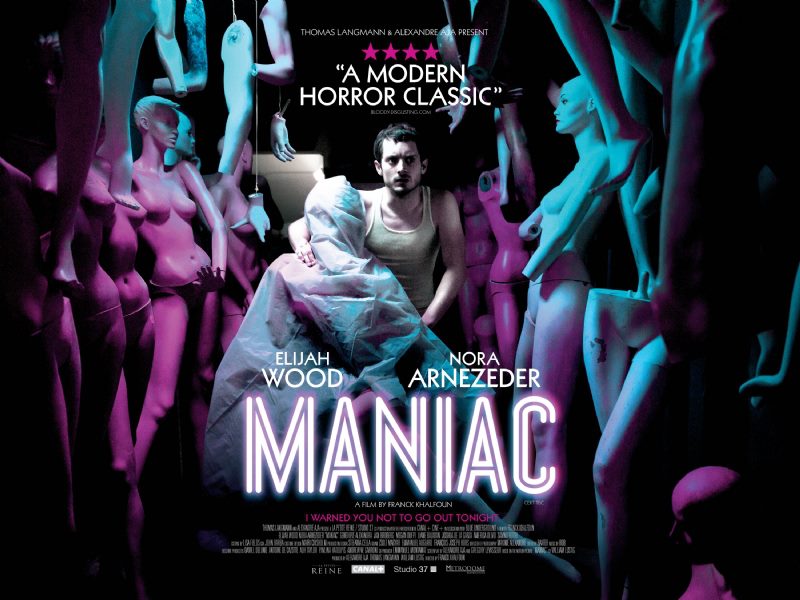 I took in Maniac (2012) at the Panic Film Fest at Screenland Crossroads on Saturday night. In complete honesty, I haven’t been more excited ever for the release of a horror film. The original Maniac (1980) has a ton of really awesome kills and is more than a little bit crazy!

Synopsis: A mentally disturbed mannequin shop owner stalks and kills young attractive women as he remembers the horrors of his childhood.

The 2012 remake seems to assume it’s viewers have already seen the original film and decides to pretty much ignore story and character development, instead giving slasher violence straight through from beginning to end!

Maniac (2012) starts strong and fast, giving the audience the best kill in the film (in my opinion) withing the first two minutes.Elijah Wood plays the title role of Frank and is more than creepy in the role, yet a completely different creepy than Joe Spinell brought to the reol.

Maniac (2012) is shot in the POV of Frank, which gives the film a different feel than I expected. Different, but I still haven’t decided if the style added or subtracted from the film itself.

Although the development of the story is not strong in the 2012 version, I still really liked the film and highly recommend it to anyone who is a fan of the slasher genre.

Recommendation: Watch the original 1980 film, then check out the 2012 film when it is released in June (limited release). If the film doesn’t come to your city, keep a look out on Amazon Instant, iTunes and Redbox!