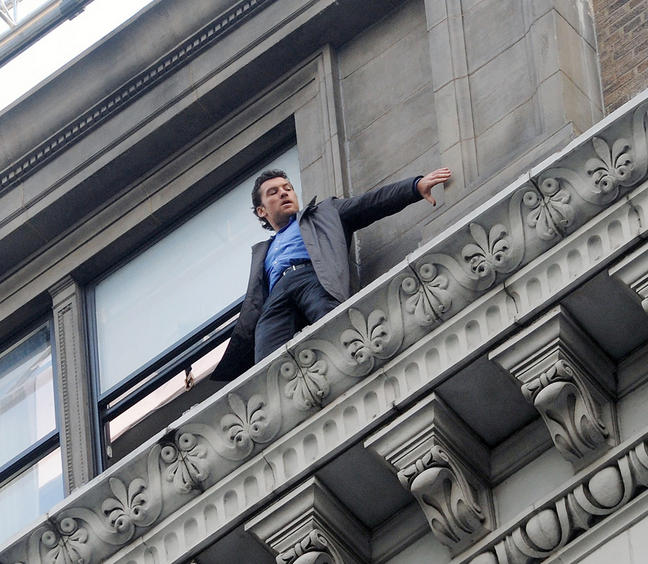 Thanks to an invitation from Kelly Blickley, last night I was able to go to a screening of Man on a Ledge (released on January 27th); directed by Asger Leth and starring Sam Worthington and Elizabeth Banks with Edward Burns, Ed Harris and Kyra Sedgwick. The screening was at AMC Mainstreet 6, which is worth a trip downtown for a film, in itself.

To be quite honest, I expected absolutely nothing from this film. The trailer didn’t get me interested and I hadn’t read or watched a single critic’s review of the movie. For me, this is the best situation to be in before seeing a movie, not to mention, it was free. So, expectations non-existent, I only wanted to hang out with Kelly and go to the theater.

The entertainment of Man on a Ledge was a pleasant surprise. The film wastes no time in grabbing your attention and continues with the edge-of-your-seat suspense the entire movie. Within the first three minutes of the film, Nick Cassidy (Sam Worthington) an ex-cop and escaped felon, is already on The Ledge, trying to convince the world of his innocence in the theft of a $40M diamond from David Englander (Ed Harris).

Like most movies nowadays, there are unneeded and unnecessary breaks in suspense with interjections of attempts at humor. Not needed, and took a little away from the film. As well, the ending was extremely predictable for the genre.

As always, it is not my goal to give you a full review of the movie, just my thoughts and Man on a Ledge was a pleasant surprise.

If a friend or family member wants go to the theater for Man on a Ledge, go with them. The movie is entertaining enough to see on the big screen.

Man on a Ledge is not yet rated on IMDB, Rotten Tomatoes or Metacritic.