Yesterday, I watched Kung Fu Panda. I figured it best to watch the original film before the 84th Academy Award nominated sequel.

I was very curious about the story in Kung Fu Panda 2, how would they get past the “Po (Jack Black) is an idiot who saves the day” theme behind the first film? 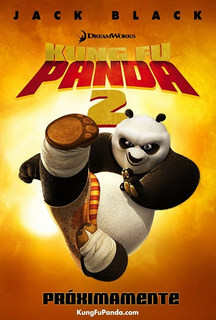 Simply, they didn’t. Po is still an idiot, and the sequel seemingly takes place very shortly after the 1st.

This time, the Dragon Warrior confronts his past as he must defeat the peacock villain, Shen (Gary Oldman), who uses the explosive powers of fireworks for evil.

Kung Fu Panda 2 was not quite as entertaining as the original, however, not bad.