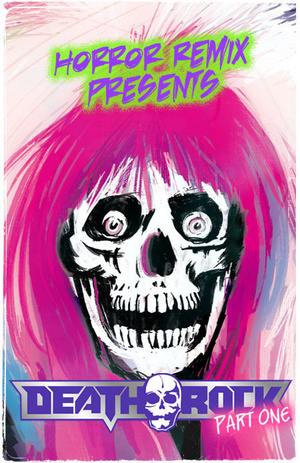 Death Rock One is a shortening of Trick or Treat (1986) and Rock ‘n’ Roll Nightmare (1987) shown double-bill style and intertwined with mashups of Hard Rock Zombies (1985), the documentary Heavy Metal Parking Lot (1986), the Christian documentary Hell’s Bells: The Dangers of Rock ‘N’ Roll (1989 – available on YouTube) and an episode of Barney and Friends… With epilogues/roastings of the films from puppets named Thunderclap (a bat) and Cheesecake (a wizard).

Of these films, the only one I have seen is Trick or Treat, which was trimmed from its running time of 98 minutes down to about 45. To be honest, I loved this movie as a kid. I don’t know if it was because of messages in records when played backwards, lightning shooting out of the guitar or the chick who gets naked and bangs a demon, then gets her ear melted off because she listened to the “devil’s music.”

Of all the films in the Remix, Trick or Treat looks like the only one I would watch, although I am mildly curious to see how bad Rock ‘n’ Roll Nightmare and Hard Rock Zombies really are.

If you’re a fan of cheesy horror and would like even more to skip the “boring” parts… and are interested in watching puppets make fun of these movies, Horror Remix is for you!

Recommendation: If Horror Remix is coming to your city, go see it – It’s free!