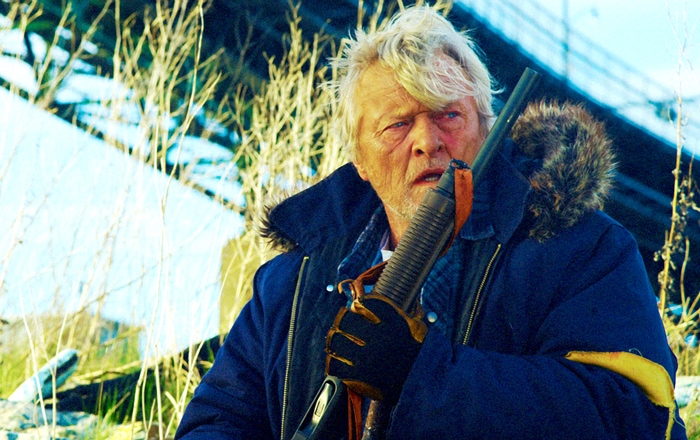 “Hobo with a Shotgun” was the winner of Robert Rodriguez’s fake trailer contest to be included in the Grindhouse double-bill of Planet Terror and Death Proof, directed by Robert Rodriguez and Quentin Tarantino in 2007. The fictitious trailer was included in some theatrical releases of the film, mainly in Canada.

Hobo with a Shotgun, directed by Jason Eisener is the second fake trailer from Grindhouse to be made into a feature film, the first was Machete (2010) directed by Robert Rodriquez.

Hobo with a Shotgun is focused around a city that has been taken over by a family of murderous drug dealing thugs who also control the police force. Murder, drugs, corruption and pedophilia run rampant. Hobo (Rutger Hauer) has one goal in life; save enough money to buy a lawn mower, in hopes to get off the streets.

While purchasing the lawn mower at the local pawn shop, three thugs burst in and hold a mother and baby at gun point while robbing the shop. Hobo can’t take it anymore, grabbing a shotgun and taking the law into his own hands.

Rutger Hauer is fantastic as the Hobo, and some of the dialogue is even slightly muddled and incoherent, in the manner of a drunken hobo.

The movie is truly in the style of the 70s horror/thriller. A ton of blood with over-the-top scenes. A ton of fun and no need to over-critique the movie. Just sit back and enjoy.

Hobo with a Shotgun falls into my “Entertaining” category. Worth a watch.

What Should I Watch for Tomorrow?