Directed by Danfung Dennis, Oscar nominated documentary, Hell and Back Again, follows the story of a young Marine (Nathan Harris) as he leads men in battle in Afghanistan, through his gun shot wound injury, rehabilitation and the realization he will never return to the Marine life he loved. 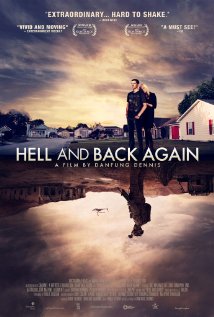 Hell and Back Again has a similar feel of Kathryn Bigelow‘s Academy Award winning Best Picture, The Hurt Locker (2008).

The story is told only through the camera and Nathan Harris himself. Dennis bounces the story back and forth between battle in Afghanistan, which Dennis filmed himself, and rehabilitation and readjustment to life back home in the US. The story comes to a conclusion with Harris’s telling the story of his injury over film of the battle in which he was injured.

Documentaries are one genre of film I tend to more closely follow the ratings and recommendations of the critics over the masses. Hell and Back Again is not a typical documentary; there are no interviews, no stats, only the story of a man told through the lens of the video camera. I enjoyed this film. If you are a military buff, so will you.