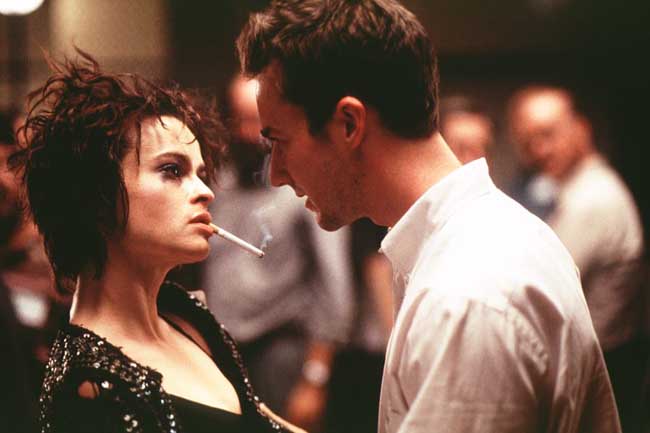 In my quest to watch a movie a day in 2012, the next step was a logical progression from Se7en to Fight Club. It was Fight Club that surpassed Se7en as my favorite movie, and it still stands today. Like Se7en, Fight Club is directed by David Fincher… Don’t be surprised if Fincher’s entire filmography finds it’s way onto my “2012: A Movie a Day” list. That is, if I can stomach Panic Room  for my second ever viewing.

To be honest, Fight Club is the only movie I have liked better than the book. Chuck Palahniuk’s novel, to me, seemed a bit more over the top, and more difficult to believe the plot twist, once revealed.

I love the anti-commercial sentiment in the film, which is a different route than the book. I am always amazed by people’s NEED to acquire things that truly shouldn’t matter. Rejection of social norms and expectations are in the forefront of Fight Club. Think for yourself, be what you want to be and be yourself without conforming to ideals and principles of others. Those are solid messages from a movie, however, don’t go insane in the process… and PLEASE, don’t blow shit up!

Fight Club is as much of a comedy as a thriller, with tons of great one-liners and memorable quotes. This is probably what drove me to see the movie in theaters, upon it’s original release, seven times… and to see it in theaters each time a smaller local theater chooses to screen the movie, not to mention, I never pass it up on TV or when a friend invites me to watch.

Brad Pitt is perfect as Tyler Durden. Edward Norton is perfect as the Narrator. Helena Bonham Carter is perfect as Marla Singer. Meat Loaf is perfect as Robert Paulson. Sometimes I am amazed to later find out actors who were originally cast in a role, or who were initially sought for a role. Honestly, could you picture Russel Crowe as Tyler, Matt Damon as the Narrator or Reese Witherspoon as Marla? If you’ve seen the movie, your only response could be: NO

In 2000, I dressed as Tyler Durden for Halloween, with my girlfriend at the time dressing as Marla Singer, and friend, Alex Thompson, dressing as the Narrator. I wish I had pictures, but for whatever reason, I don’t. I own 2 copies of the book, one signed by Chuck Palahniuk, and various pieces of Fight Club art, along with the movie sound track by The Dust Brothers, which, if you’re into the whole car audio thing as I once was, is amazing.

A must see! Funny enough for those who don’t care much for thrillers.