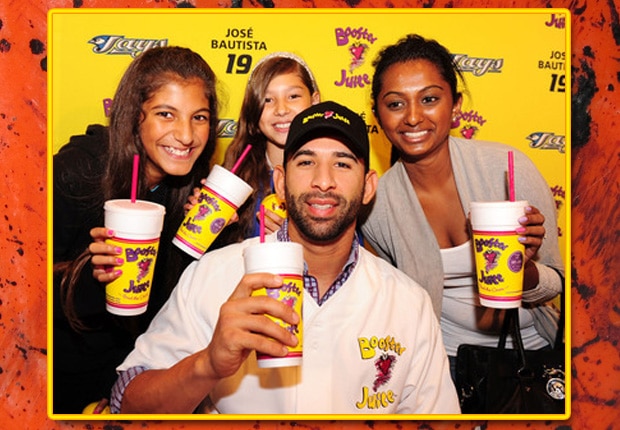 [quote_left] So, that’s what Canadians look like? Quite a diverse people those Canadians are… [/quote_left]Toronto Blue Jays slugger, Jose Bautista, has teamed up with Booster Juice, a Canadian juice and smoothie company.

Remember that 13 game stint with the Royals in 2004 when Bautista batted .200 with 1 RBI and ZERO home runs? Don’t feel bad… Nobody does.

The jump to 54 HRs from his previous career best of 16 HRs in 2006 prompted many fans, fantasy baseball players, bloggers and legit baseball people to insinuate the use of steroids… Maybe we were all wrong… “Joey Bats” was gettin’ his “bump” from a premium juice bar which promotes an active and healthy lifestyle.

Either way, I’m simply happy everyone in my fantasy baseball league kept passing on him during the 2011 fantasy draft, unitl I finally said, “What the hell!? I can’t let him fall any farther.”