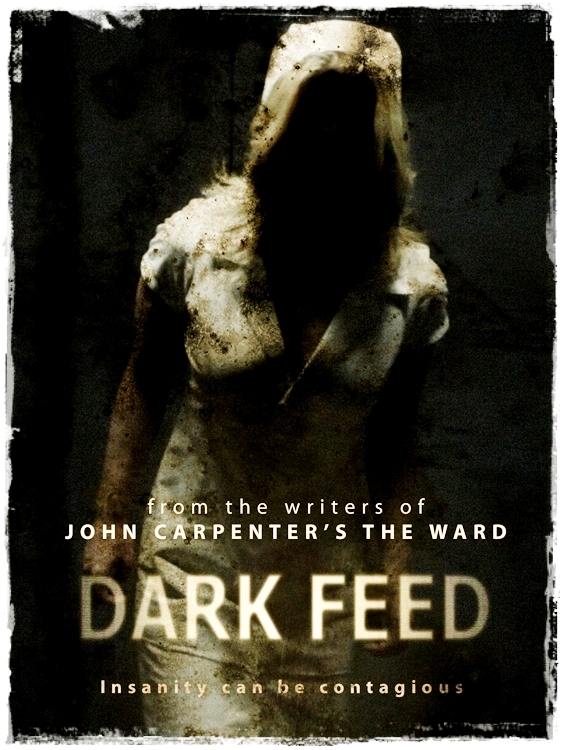 Dark Feed is about a low-budget film crew shooting at an abandoned mental hospital. To save on lodging, the cast and crew also stays overnight throughout filming at the hospital. Disturbing details and photos in the hospital’s logs show disturbing experimentation performed by the hospital’s doctors. Does the hospital’s terrifying past affect the film crew? Is insanity contagious?

If you’re a fan of low-budget horror films, Dark Feed is for you. There are some really nice “insane” scenes in the film and I’m always a fan of movies about making movies, except Piranhaconda. Dark Feed is written and directed by Michael Rasmussen & Shawn Rasmussen who also wrote The Ward (2010), directed by John Carpenter.

At times the low-bugetedness of Dark Feed shows through in bad lighting and poor acting by some of the cast, but also at times, the cinematography is awesome and enhances the creepiness of the abandoned mental hospital.

I tend to rate indie and low-budget films differently than major studio productions… and for good reason, if you have millions and millions of dollars, yet you still make crap, you deserve to get bashed. Limited budgets, mean limited resources. I like the story and creepiness of Dark Feed and for me, that’s enough to drive my rating.

Recommendation: Check out Dark Feed as a rental.

Thanks to Dark Feed and Lionsgate for sending me a DVD to review. Now that I have reviewed the film, I would like to pass it on to one of you. This is a one-time viewed DVD.

A winner will be chosen at random on April 7th.

Congratulations to Earline Beebe on wining Dark Feed on DVD! Let us know what you think in the comments after you watch!