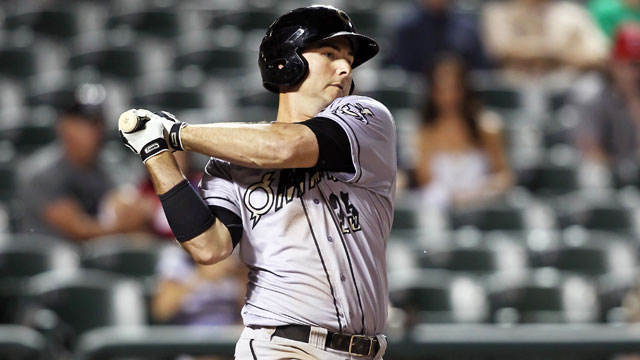 Thursday night, amidst the Royals announcement of the signing of 2012 #5 overall draft pick, Kyle Zimmer, the team also announced that Clint Robinson will join the team on the upcoming three game road trip to Pittsburgh.

In a corresponding move, the Royals sent LHP Ryan Verdugo to Omaha. Verdugo spent two games with the Royals, not playing in either.

So, now that Robinson has reached the Majors, what should fans realistically expect? Not much.

Why shouldn’t fans expect too much? Simply, the Royals will not take Billy Butler’s bat of the lineup. Period. Eric Hosmer is one of the best defensive first basemen in the league, where Robinson is mediocre, so don’t expect Robinson to enter the game late as a defensive replacement for Butler while in National League parks. Instead, Hosmer will move from OF to 1B and whichever of the OFs are given a day off will enter.

So, Robinson’s role in interleague play will be as a pinch hitter, getting one at-bat at most per game. Don’t get me wrong, no player is ever upset to make it to the big leagues, but if Robinson is successful as a pinch hitter – no matter how well he hits – the argument against him will be that the sample size is too small to make any definitive decision on his MLB abilities and future.

If Robinson looks lost at the plate, then the argument will be backed “with proof” that Robinson is nothing more than a 4-A player.

As you see, this is a no-win situation for Robinson.

At 27 years-old, Robinson will not garner much trade value, no matter how well he hits in the mini-showcase. That being said, it seems the Royals really like Robinson… Especially as a professional. Clint, more than anyone else completely understands his unlucky situation…

“Sometimes there’s more to it than numbers. Sometimes it’s more about opportunities,” Robinson said. “With the strong Drafts that we’ve had with guys like [Mike] Moustakas and [Eric] Hosmer, it’s kind of hard to find a spot for a 25th-round senior signing. You’ve got a guy you’ve signed for millions of dollars who’s playing really well, that’s just the business of the game. So you just kind of have to bide your time and be patient and keep showing them that I’m still here, I’m doing well. … Not everybody’s going to skyrocket like all the first-round guys… This is one of those things I’ve done my whole career,” Robinson said. “I’m going to go where they tell me to go and play where they tell me to play. Those decisions aren’t really up to me, so I’m going to soak up every minute of this and enjoy it. Whatever happens when Interleague Play isn’t in effect anymore, I’ll go with that.”

What would you like to see happen with Clint Robinson?