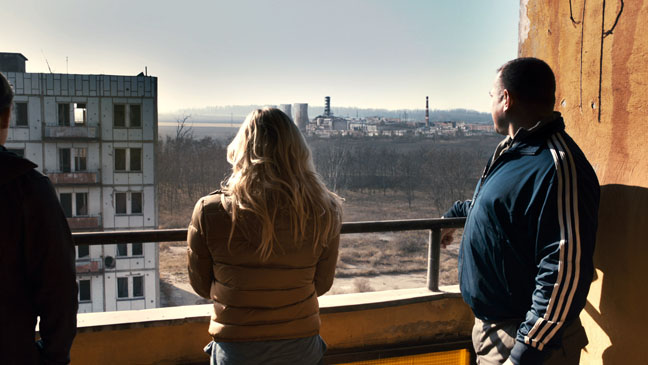 I was lucky enough to be invited to a pre-release screening of Chernobyl Diaries on Thursday night at Cinemark on the Plaza in Kansas City… I am just now getting around to writing my thoughts.

From the previews, it was hard to tell if the film was a 1st person movie or not. In general, I am not a big fan of 1st person films… They simply seem a bit lazy to me, in general.

Chernobyl Diaries revolves around a group of tourists who hire a guide for “extreme tourism”, a trip to the abandoned city of Pripyat, the former home to the workers of the Chernobyl nuclear reactor which melted down in April of 1986, leaving a radioactive wasteland in the surrounding city.

A unique and interesting setting for a movie, but beyond that, Chernobyl Diaries is your basic run-of-the-mill “kill ’em off one by one” horror flick… A character goes off alone, the group finds the body, another character gets separated, someone refuses to leave separtee (not a word) behind, etc, etc…

Chernobyl Diaries offers a few popout scare opportunities and I like the ending, although I doubt many others will agree. The ending is a bit of a contradiction with the title of the movie, but I did not mind.

Overall, I give Chernobyl Diaries 5/10. Other than the interesting idea for a setting for the film, there really isn’t anything else memorable, including the actual set… While the idea for the location is great, the set itself in not memorable.

I put Chernobyl Diaries in the “Red Box” category. Wait until yo can get it for a buck.

Have you seen or do you want to see Chernobyl Diaries?