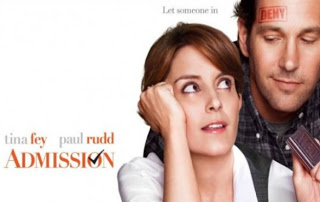 I took in a double-bill today, thanks to the rewards I have received on my AMC Stubs membership!

I already miss 30 Rock and Tina Fey and with Paul Rudd being a Kansas City guy, like me, I decided to give Admission, directed by Oscar nominee Paul Weitz (About a Boy), a shot.

Tina Fey is an admissions officer at Princeton, who discovers that a young, brilliant but strange, kid and recent Princeton applicant who attends a new-age high school may be the son she gave up for adoption when she was in college.

Admission is somewhat funny, in parts, but deals with a more serious subject matter. It really is difficult for me to classify Admission as either a comedy or a drama. The film isn’t overly comedic or overly dramatic.

I can’t say I hated Admission, but I can’t say I enjoyed it too much either. If you’re  a fan of Tina Fey or Paul Rudd, the film is worth a watch, just don’t expect too much.

Recommendation: Catch this one on Redbox or when it hits Netflix.