Starring Demián Bichir, A Better Life (directed by Chris Weitz), is the story of an illegal immigrant father in search of a better life for his 14 year old son and himself. Carlos Galindo (Bichir) is given the opportunity to buy his boss’s truck, tools, equipment and Beverly Hills gardening clients when his boss decides to buy a farm and move back to Mexico. Carlos is determined to do anything he can to keep his son (José Julián) out of gang life in East L.A. 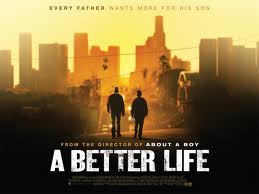 For his role, Bichir is nominated for “Actor In a Leading Role” in the 84th Academy Awards. The nomination is well-deserved for Bichir. He is absolutely fantastic. As a viewer, you can really feel all emotions of the character as he tries to connect with his rebellious son.

Although relatively unknown, you may remember Demián Bichir from: Che: Part One and Che: Part Two as Fidel Castro and “Weeds”  as Esteban Reyes.

A Better Life falls into my “good” category of movie. It is an interesting film that addresses a group of people in America who may not be too familiar to many Americans. The film is worth a watch, especially for Demián Bichir’s performance.